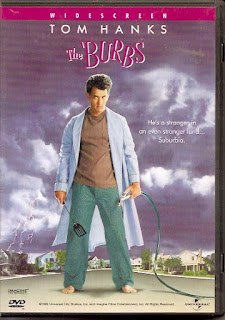 Tom Hanks Quadruple Feature #5 (Ok, I guess five is one too many for a quadruple feature, but I stumbled upon this at my local Salvation Army store, and I had to pick it up)
Synopsis: Hilarity ensues when bored middle-class homeowners criminally harass a family that’s introverted and a little bit different.
Blurb From the DVD Jacket: “Tom Hanks portrays suburbanite Ray Peterson, whose plans for a peaceful vacation are disturbed by a creepy new family on the block, in this outrageous suspense-comedy directed by Joe Dante.”
What Did I Learn?: 1) Suburbanites are just not going to take it anymore. 2) A sardine on a pretzel makes a pretty awful hors d'oeuvre.
You Might Like This Movie If: You can understand why Ray and his neighbours might be a little nuts.
Really?: 1) So, the Klopecs are secretly axe murderers with incriminating evidence in their basement… isn’t it a little odd that they would call the cops when they discover the neighbours have broken inside? 2) So….nobody ever cleans up the garbage on the street?
Rating: I have to admit that I’ve always had a place in my heart for The Burbs - maybe because I grew up in an exurban town in the GTA and I can identify with Ray Peterson, and maybe because it’s a very laid-back horror-comedy that never takes itself too seriously, and delivers some solid laughs - the scene when everybody grabs bags of trash out of the garbage truck is unforgettable.I liked the chemistry between Hanks and the Carrie Fisher (who doesn’t have a lot to do, but is quite good as Ray’s long-suffering wife), but Rick Ducommun and Bruce Dern are awesome as the Peterson’s completely insane neighbours - they steal the movie. Highly recommended. 9/10 stars.