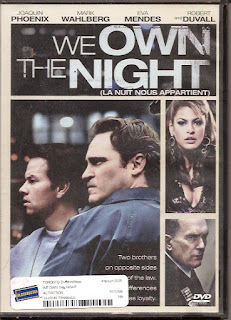 Synopsis: Fun-loving young man with cute girlfriend discovers his father is in danger, reluctantly enters the family business, and discovers he’s much better at it than his blowhard brother. Wait - it’s the mirror image of The Godfather!
Blurb From the DVD Jacket: “What if your family stood in the way of everything you worked for? Bobby Green (Joaquin Phoenix) forsakes his families (sic) tradition in law enforcement to become a Brooklyn nightclub owner.”
What Did I Learn?: 1) If you piss in your pants, you only stay warm for so long. 2) It’s better to be judged by twelve than carried by six.
You Might Like This Movie If: You're deeply nostalgic for 1988.
Really?: 1) I had a bit of trouble believing Bobby’s big meeting with Vadim and his crew in the stash house. First of all, he never once inquires about what his cut might be for distributing Vadim’s heroin (which I imagine would be his primary question if he were sincere), but why in the world would he ask where the heroin comes from when he’s wearing a wire and the cops specifically told him not to say anything that would attract suspicion? 2) The movie takes place in 1988, yet Bobby’s club keeps playing Blondie’s Heart of Glass, which was released several years earlier. Wouldn’t the hottest nightclub outside Manhattan play something a little more contemporary? 3) Do Bobby and Joseph actually speak Russian? They use a phrase or two now and then, and their father’s surname name is Grusinsky, so they might have a basic understanding of Slavic languages, but this is never made entirely clear. 4) Wow, Bobby’s personality completely transforms after his brother gets shot, doesn’t it?
Rating: We Own the Night is an enjoyable, if somewhat formulaic crime thriller that works thanks to some good performances and stylish direction by James Grey. Oh, and I have to give this film an extra star for including an original, compelling, and highly memorable car chase shot entirely from the vantage point of one driver. 8/10 stars.