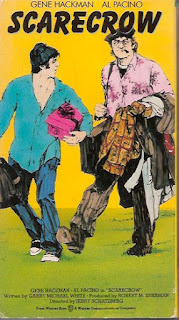 Gene Hackman Movie #4
Synopsis: Doomed delinquent dad delights deeply determined, demented drifter during disastrous drawn-out drive. Destination: Detroit!
Blurb From the VHS Jacket: "Hackman. Pacino. On the road in an award-winning American classic."
What Did I Learn?: 1) For every car, there’s dirt. 2) Scarecrows are beautiful. 3) Gene Hackman was not a skilled striptease artist.
You Might Like This Movie If: You really want to see Al Pacino tell off a passing motorist with an odd insult.
Really?: I had a bit of trouble believing Riley (Richard Lynch), who’s only serving 18 months in prison, is allowed to drive a jeep and even has his own, personal collection of hard liquor because he bribes the guards, would want to rape Lion. Couldn’t he arrange for a conjugal visit, or something?
Rating: Scarecrow is an unusual, but extremely well-acted character-driven drama that features two iconic stars who never worked together again, afterwards. Scarecrow isn’t an easy film to watch - Lion’s (Pacino) journey turns really tragic in the second act, and the ending doesn’t resolve much, but it’s a memorable story about two very different men who form a strong friendship, and it’s well worth watching at least once. Interestingly, Pacino said that Scarecrow was the best script he had ever read, and Hackman was most proud of his performance in movie. Highly recommended. 9/10 stars.