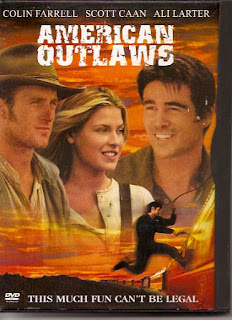 Please click the link to read my review of The Assassination of Jesse James by the Coward Robert Ford.
Synopsis: It’s the story of Jesse James….reimagined as Young Guns meets the Dukes of Hazzard.
Blurb From the DVD Jacket: “To corrupt railroad barons, Jesse James and Cole Younger are meddlers, troublemakers, ingrates and candidates for rope neckties. To the downtrodden folks in and around Liberty, Missouri, they’re something far different. Heroes.”
What Did I Learn?: “Just ‘cause (somebody) reads them books and knows all them big words don’t make him smart!”
You Might Like This Movie If: you think Colin Farrell is bad, like Jesse James.
Really?: 1) I’m pretty sure a flimsy wooden table would NOT protect a gang of outlaws from a hail of gunfire. 2) Wait - a Union soldier attempts to shoot Jesse fucking James, the poor guy’s rifle fails to fire, so Jesse allows him to run away? That doesn’t sound right… 3) So, the film ends with Jesse and his bride moving to Tennessee in order to establish a farm, and Jesse makes it clear he has no interest in returning to a life of crime? Again, that doesn’t sound right… 4) Wow….Bob and Cole get pretty excited about corn, don’t they?
Rating: American Outlaws is a long-forgotten Young Guns clone that’s fine for an evening’s entertainment, but comes perilously close to Bad Movie status. The film features some impressive action sequences and I liked Timothy Dalton’s somewhat-complex performance as the famed Allan Pinkerton, yet it suffers from a badly-written and simplistic script that whitewashes Frank and Jesse as early versions of Bo and Luke Duke, and I couldn’t help myself from thinking that Colin Farrell and Ali Larter were completely miscast as Jesse and his bride, Zee. 5.5/10 stars.