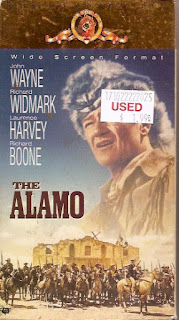 This would have been perfect for my salute to John Wayne westerns.
Synopsis: The Duke takes on the entire Mexican army, and comes pretty close to single-handedly winning the war for Texan independence.
Blurb From the VHS Jacket: “Featuring some of the most spectacular battle sequences ever put on screen, The Alamo - which received seven Oscar nominations, including Best Picture - captures both the sweeping spectacle and human drama that surrounded this historical event.”
What Did I Learn?: 1) “The time to live and the place to die. That’s all any man gets.” 2) “Republic is one of those words that can give you a feeling that makes your heart warm.”
You Might Like This Movie If: You remember the Alamo.
Really?: 1) See: “Synopsis.” Seriously, Davy Crockett and the boys somehow manage to sneak out of the Alamo not once, but twice, in order to destroy a particularly large Mexican cannon and steal a herd of cattle. Didn’t Santa Ana post any sentries outside? 2) Crockett forges a nasty letter from Santa Ana, has it read to his men, admits it’s all a pack of lies, and they still want to defend the Alamo because the letter offers a flavour of Santa Ana’s thinking? Wow, those Tennesseans are pretty dumb! 3) Gee, we’re led to believe that rich merchant (and Santa Ana sympathizer) Emil Sand is going to be some sort of major villain, and then…he disappears somewhere in the second act.
Rating: While I generally enjoy John Wayne’s westerns, The Alamo (which he also produced and directed) isn’t one of his better oaters. It’s far too long, far too preachy (see: “What Did I Learn?”) and the dialogue is cringe-inducing at times. Still, the third genuinely exciting, and the I liked the mutual nastiness between Travis (Laurence Harvey) and Jim Bowie (Richard Widmark). 6/10 stars.