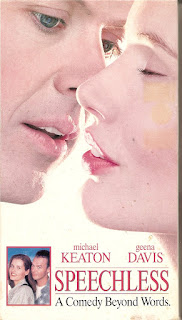 Synopsis: Christopher Reeve portrays a smarmy, self-centered yuppie who complicates the relationship between a feuding high-powered couple. Wait – wasn’t that the Synopsis for Switching Channels?

Blurb From the VHS Jacket: “A comedy beyond words.”

What Did I Learn?: Apparently, President Trump could win over a lot of detractors by naming his proposed border fence with Mexico the “Friendship Wall.”

You Might Like This Movie If: You know that it's really, really important to hire a good speechwriter.


Really?: 1) I had a bit of trouble believing a junior high school teacher would allow Kevin and Julia to engage in a foul-mouthed screaming match in front of an assembly of young students, even if they are honoured guests. 2) I’m pretty sure a Senatorial candidate’s Press Secretary would be fired if he/she decided to vanish right after the big debate without taking any questions from reporters. (Oh, and I’m also fairly certain that speechwriters don’t call that many high-level shots within a campaign). Funny how ‘Baghdad’ Freed (Reeve) stops being a romantic rival to Kevin (Michael Keaton) long before the end of the movie, isn’t it?

Rating: Speechless has a few funny moments (it’s strangely prescient about the politics of building a physical barrier with Mexico), and Keaton shares some nice chemistry with Geena Davis, but it’s otherwise a pretty run-of-the-mill romantic comedy that possesses only a superficial Hollywood understanding of its subject matter. (Needless to say, Kevin, the Republican-leaning speechwriter is just a hired gun who eventually falls head-over-heels for Julia, the died-in-the-wool liberal Democrat, and ends up managing her congressional campaign because she’s a true believer). 5.5/10 stars.