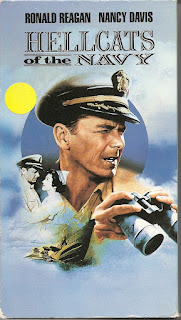 A few people know that I share a birthday with the late, great Ronald Wilson Reagan, 40th President of the United States. To mark this occasion (Reagan would be 106 today) I have decided to review the only film that features both Ron and Nancy together. Oh, and this would have been perfect for my salute to submarine movies, back in 2013.

Synopsis: Submarine commander with mellifluous voice informs senior officer that the secret of command is the ability to abandon valued crewmen at the first sign of trouble. (I wonder if Don Regan or Oliver North ever watched this movie....)

Blurb From the VHS Jacket: “Based on a true incident, submarine Commander Casey Abbott (Reagan) leads a daring mission to enter the heavily mined Tsushima Straits to sever a vital link between the Asiatic mainland and the Japanese home islands.”

What Did I Learn?: The Gipper was pretty good at presenting a reassuring air of authority, but overall, his acting was rather wooden.


Really?: 1) Wait – how could the submarine house Navy frogmen when SCUBA gear was invented after the war? 2) So, the screw gets caught in a cord, and Commander Casey is the only one who can swim to the back of the boat and untie it? I realize senior officers go out on “away” missions all the time on Star Trek, but would that really happen in real life? 3) Wait – Abbott claims that his chart, which depicts a safe passageway through the minefield could change the course of the way, and then we later find out the Japanese have rearranged the mines? Didn’t anyone envision that possibility?

Rating: Hellcats of the Navy is an unoriginal, by-the-numbers B-movie that’s memorable for the simple reason that it co-stars a future President and First Lady (she’s barely in this picture, by the way, and her scenes don’t add very much), and includes a cameo appearance by former Fleet Admiral Chester Nimitz. While I fondly remember Reagan as one of America’s better presidents, I cannot recommend this movie. 4.5/10 stars.

Would It Work For a Bad Movie Night?: Maybe. Take a drink any time Abbott says or does something heroic.