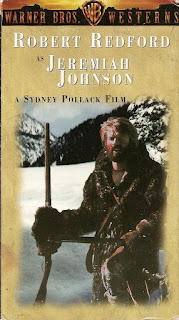 Dang – this would have been perfect for my tribute to “Revenge” movies.

Synopsis: It’s a really bad idea to piss off Jeremiah Johnson. Oh wait, that sounds a lot like the Synopsis of Nevada Smith.

Blurb From the VHS Jacket: “Soured by civilization’s ways and wars, Jeremiah Johnson sets out in the mid-1800s to become a mountain man, seeking solitude in a wilderness whose purity he never questioned.”


You Might Like This Movie If: You really enjoy scenes of intense violence set to guitar chords.


Really?: 1) Ok, I realize Jeremiah is hungry, and inexperienced in the ways of mountain living, but who in their right mind would plunge into a stream in order to catch a fish in the dead of winter? 2) Wait – Jeremiah Johnson is a pretty good-looking guy. Why in the world would he choose a life of solitude (more or less) on a frozen mountain-top when he might otherwise marry the girl of his dreams and live in comfort? Redford does a great job with the role, but I have to wonder if he was miscast. 3) I know that Jeremiah wants vengeance for the murder of his wife and adopted son, but taking on the entire Crow nation on their territory seems awfully foolhardy.

Rating: Jeremiah Johnson is a powerful, and haunting adventure that was shot entirely in some very remote corners of the Rocky Mountains. While the film might offend some modern sensibilities with its use of the Crow nation as the hero's eventual antagonists, it’s important to remember that the movie treats all of the Native Americans that Jeremiah encounters (friends and foes alike) respectfully, and it's still well worth watching. Highly recommended. 10/10 stars.