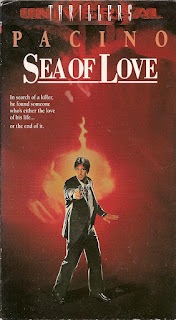 This would have been perfect for my Al Pacino film fest in 2012.  Oh, Happy Groundhog Day!

Synopsis: Burnt-out middle-aged detective and dumpy partner investigate hot chick who might be a serial killer. Wait...wasn’t that the Synopsis for Basic Instinct?

Blurb From the VHS Jacket: “In search of a killer, he found someone who’s either the love of his life....or the end of it.”

What Did I Learn?: “(M)aking people feel good about themselves so that they'll cooperate with you” is a surprisingly effective life strategy.

You Might Like This Movie If: You've always been intrigued with the idea of making your own sea of love.


Really?: 1) Ok, I realize the title of the movie is Sea of Love, and the playing of old music/records provides a clue for the detectives, but how many times do we have to hear that song? Heck, there’s even a scene when Pacino and John Goodman sing it together at a police banquet. It’s still playing in my head! 2) So, what was the point of Keller (Pacino) nearly-arresting that Iranian bodyguard near a private school? Did somebody figure the trailer needed a scene of Pacino waving his gun and looking tough? 3) I guess New York City cops don’t face any consequences for sleeping with murder suspects. 4) Funny how Ellen Barkin gets second-billing in this movie and it takes her character, what - an hour to finally appear?

Rating: Sea of Love isn’t a great film, but it’s generally credited with reviving Pacino’s career after a string of duds, and it’s still a compelling (if slow-moving) thriller with a surprise ending. 8/10 stars.