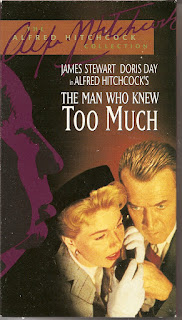 Blurb From the VHS Jacket: “James Stewart and Doris Day, in a rare dramatic role, are superb in this brilliant suspense thriller from the undisputed master. Stewart and Day play Ben and Jo MacKenna, innocent Americans vacationing in Morocco with their son, Hank. After a French spy dies in Ben’s arms in the Marrakech market, the couple discover their son has been kidnapped and taken to England.”

What Did I Learn?: The rules for eating at a Moroccan restaurant are more complicated than IKEA assembly instructions.

You Might Like This Movie If: You know there's nothing more annoying than a guy who knows too much.
Really?: 1) Holy crap, how many fucking times do we have to hear Doris Day sing “Que Sera Sera?” 2) So wait, Louis Bernard was obviously in cahoots with the Arab on the bus, but it was the Hank who provoked the phony scuffle by accidentally removing a woman’s hijab. How could they have planned that? 3) Um...exactly how long did those fans of Jo wait for the McKennas to return to their London hotel room? I had a hard time believing they wouldn’t feel uncomfortable and simply leave. 4) I realize the 1950s were a little more formal than our current decade, but why does Ben feel the need to wear a suit and tie on the bus to Marrakech? Wouldn’t it be about a zillion degrees outside?

Rating: The Man Who Knew Too Much is a stylish remake of Hitchcock’s 1934 thriller, and overall, it’s a much more entertaining movie. That said, I have to deduct a couple of points for an extremely lacklustre ending, and the overuse of Day’s God-awful “Que Sera Sera.” 8/10 stars.