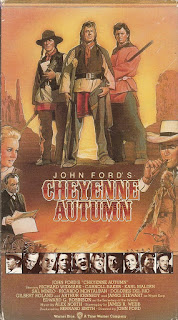 Synopsis: A tragic retelling of oppressed Native Americans fleeing starvation, disease and neglect... punctuated with half an hour of slapstick shenanigans in Dodge City. Wait, WTF?!?

Blurb From the VHS Jacket: “Cheyenne Autumn, the last Western directed by six-time Academy Award winner John Ford, ranks as one of his best.”

What Did I Learn?: 1) "Nothing that affects an officer’s conduct is private." 2) "It takes a blue coat to make a white man a soldier... but a Cheyenne is a soldier from the first slap on his butt." 3) "A mademoiselle is a madam who ain't quite made it yet - only younger and friskier."

You Might Like This Movie If: You really want to see a tough-as-nails, proud Cheyenne moving slowly across the American heartland.
Really?: 1) See: “Synopsis”; seriously, that lighthearted, half-hour Dodge City intermission featuring Stewart and Arthur Kennedy really doesn’t fit with the rest of the film. 2) Funny how the Cheyenne never seem to leave Monument Valley, isn’t it? 3) So, wait – the film’s main villain is a German-American Army officer who wants to send the Cheyenne home on a death march because he’s only following “orders?” Is that really what happened, or is this best understood as a reaction to the Eichmann trial? 4) Would it have been possible for Capt. Archer (Richard Widmark) to leave the fort, travel all the way to Washington DC to somehow meet with the Secretary of the Interior (Edward G. Robinson) and then get back in time for the two of them to settle the dispute?

Rating: Cheyenne Autumn was John Ford’s last Western, and it is well worth a viewing if you’re a fan of his work. The movie features a star-studded cast and some beautiful cinematography, and it tells a true story that needs to be remembered.That said, Cheyenne Autumn has a few problems (see: “Synopsis” and “Really?”), including a protagonist who is largely disconnected from the big picture, and is more of an observer than anything else. 7/10 stars.