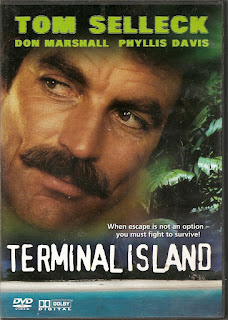 What Did I Learn?: Apparently, it’s really, really easy to manufacture gunpowder from a few rocks on an island.

You Might Like This Movie If: You know that being trapped on an island can really bring out the worst in people.
Really?: 1) A co-ed prison? And all of the women happen to be smokin’ hot? Well, that explains the absence of any male-on-male rape. 2) So, why does Monk (Mosley) and the others take orders from Bobby, who looks like he couldn’t fight his way out of a paper bag?  3) Who exactly are the rebels on the island, and why are they feuding with Bobby’s group? More to the point, why are we supposed to care one way or the other about them?

Rating: As a fan of the Magnum PI TV series, I wanted to like Terminal Island, but it’s just plain awful for a number of reasons (see: “Synopsis,” “Really?” and “What Did I Learn?”), and imagine my surprise when I discovered that Selleck and Mosley don’t even exchange any dialogue with each other! I cannot recommend this movie. 3/10 stars.