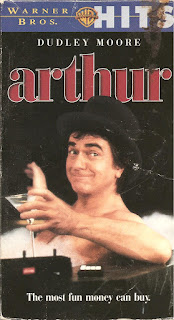 Blurb From the VHS Jacket: "Arthur Bach is very rich - and very drunk most of the time, with a bar bill that reads like the national debt. He also stands to lose his $750 million inheritance if he doesn't marry most boring blonde on Long Island within a month."

What Did I Learn?: Wealthy drunks are charming, and extremely funny.

You Might Like This Movie If: You really want to watch an intoxicated young man whose father owns half of Manhattan.

Really?: 1) Funny how Arthur drinks like the Soviet Politburo, and we never once see him hung over the next day (although his Butler mentions that it happens, at least occasionally). 2) I realize this film was released, and set in 1981, but didn't anyone find it even remotely disturbing to see Arthur gulping down booze when he was behind the wheel of a moving vehicle?

Rating: Arthur may seem a little dated in 2015 (See: "Really?" And I'm guessing a real-life Arthur would probably act a lot more like Justin Bieber than Dean Martin's stage persona), but Moore shares some incredible comedic chemistry with both Gielgud and Minelli, and it's a genuinely likeable and funny film. Highly recommended. 9/10 stars.