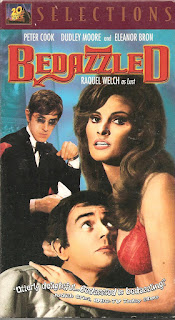 Blurb From the VHS Jacket: “Stanley (Moore) is a hapless short-order cook who is hopelessly in love with a  waitress named Margaret (Eleanor Bron) – although she barely knows he’s alive. Enter George Spiggot (Peter Cook), a.k.a. Satan, who grants Stanley seven wishes in order to win Margaret over, but his efforts are hilariously hampered by the Seven Deadly Sins – including the insatiable Lilian Lust (Raquel Welch)!”

What Did I Learn?: God isn’t very nice. (Wait, I think already learned that from The Ten Commandments)

You Might Like This Movie If: You really want to see Dudley Moore match wits with a Beast.

Really?: 1) Hey wait – doesn’t the Devil actually say: “no obligation” when he grants Stanley his wish of a raspberry freeze? Doesn’t that disqualify it from becoming one of his seven wishes? 2) Funny how Stanley keeps making wishes right up until the end. I’m pretty sure most people would stop after Wish #2 or #3 after it became clear that Satan is either unwilling or incapable of delivering on anything.

Rating: The original Bedazzled is a little contrived (see: “What Did I Learn”), and quite dated by today’s standards, but it’s also much better than its remake (the best parts of the Fraser-Hurley version came from this film), and it’s a delight to see the legendary comedy duo of Moore and Cook exchange witty repartee. Check it out if it's ever on television. 7.5/10 stars.