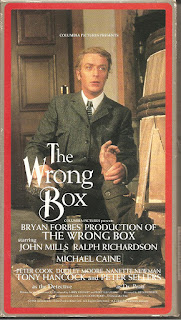 Dudley Moore Movie #5 (Actually, this is much more of a Michael Caine film, and even he has third billing behind John Mills and Ralph Richardson)

Synopsis: Tontines are nothing but trouble.

Blurb From the VHS Jacket: "A huge inheritance ignites a murderous family feud in this hilarious adaptation of Robert Louis Stevenson's classic tale."

What Did I Learn?: 1) See: “Synopsis”. 2) The tontine was named after Lorenzo Tonti, a Neapolitan banker.

Really?: See: “Synopsis” and “What Did I Learn?” Seriously, who would actually pay a large sum of money and then enter their child into such a sick and twisted arrangement, considering there’s only a one-in-thirty chance of it paying off for the kid, and he would probably be too old to enjoy the money, anyway?

Rating: The Wrong Box is a cleverly-written black comedy that features a most impressive cast, including the aforementioned Caine, Moore, Mills and Richardson, as well as a memorable cameo by Peter Sellers as a very sleazy Victorian doctor. Check it out if you get the chance. 8/10 stars.