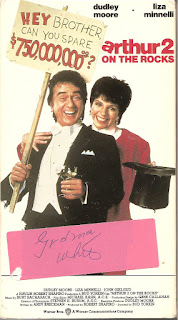 
Synopsis: It’s basically the sequel to Arthur...until it turns into Leaving Las Vegas.


Blurb From the VHS Jacket: “Effervescent Dudley Moore takes up where he left off as the multimillionaire prankster Arthur Bach. Back, too, is Liza Minelli as the ex-Brooklyn waitress who’s gone from slinging hash to matching wits with her hilarious hubby.”


What Did I Learn?: “IOL” is short for Instant On Lighting


Really?: 1) The movie makes it clear that adoption agencies take alcoholism seriously, but come on – is there any way in the world that a 24/7 drunk would ever legally receive a baby from one? 2) So wait – Burt Johnson and Arthur’s family cut him off from his inheritance, but didn’t he have to sign something, first? Doesn’t that suggest he has legal rights to his money, and the next logical step might be a lawsuit? 3) Funny how the sub-plot of Arthur breaking in his new butler gets completely lost until the very end, isn’t it?


Rating: I have to give Arthur 2: On the Rocks a less than spectacular review. While the film features a number of great one-liners, and it’s nice to see Moore trade wisecracks with Minelli and Gielgud, it takes a VERY wrong turn in the second act when Arthur’s alcoholism is suddenly taken seriously. The mood of Arthur 2 changes entirely, and the last half-hour feels incredibly contrived. That said, it’s hard not to cheer for the reformed Arthur after he gets his shit together and gives Burt a well-deserved punch. 6/10 stars.