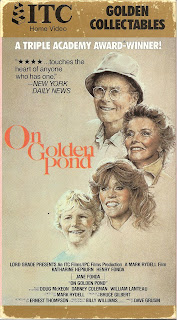 
Blurb From the VHS Jacket: “Henry Fonda, in his last role, plays Norman Thayer, a feisty octogenarian obsessed with death and emotionally distant from his daughter, Chelsea (Jane Fonda). Katharine Hepburn is radiant as his wife, Ethel, who comes with him to spend their 48th summer on Golden Pond. When Chelsea arrives with her fiancé and his son (Dabney Coleman and Doug McKeon), old wounds are inevitably opened and feelings are hurt.”


What Did I Learn?: The very best cure for the onset of dementia (possibly Alzheimer’s) and a bad heart condition is lots and lots of fishin’.


You Might Like This Movie If: You love hearing Katharine Hepburn exclaim the words “Norman, the loons!” In fact, you’ve always thought those words should be used in some bad techno music.


Really?: I had a bit of trouble believing Chelsea would pretty much dump her boyfriend’s 13-year old son on her elderly parents for a month without any prior consultation. They could have said “no”, after all.


Rating: On Golden Pond is a warm and wonderful film that’s mostly based upon the stage play that bears its name (the filmmakers took a few liberties, including an ending that’s decidedly more upbeat). 10/10 stars.