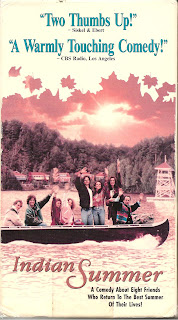 
Blurb From the VHS Jacket: “Settle back for a delightful Indian Summer – the heartwarming comedy about eight friends who reunite at their summer camp after 20 years! ... Pack up your gear, this week at camp is sure to be a hilarious and feel-good treat for everyone!”


What Did I Learn?: Americans just love to wear Hudson’s Bay coats and Roots jackets.


You Might Like This Movie If: You’ve always wanted to see a sensitive, nostalgic and middlebrow sequel to Meatballs.


Really?: 1) It’s amazing how all of these kids somehow stayed in touch with each other, and how easy it was to contact everyone, pre-Facebook. 2) Hmmm... call me a party pooper, but if I woke up in a puddle of my own urine because some smartass placed my fingers in a glass of warm water when I was sleeping, I would very likely leave for home that morning. 3) How many summer camps offer boxing (without sparring headgear)? That sounds like a lawsuit just waiting to happen.


Rating: Indian Summer is a bit light on the laughs, and some of the characters aren’t entirely fleshed-out, but it is a nice little comedy-drama. 8/10 stars.