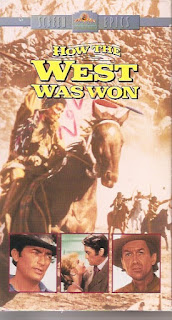 Synopsis: Henry Fonda stars as a rough, tough son-of-a-gun in a super-long Western…no, that’s the Synopsis for Once Upon a Time in the West. Um…. James Stewart is woefully miscast in a role that calls for a much younger man…no, that’s The Man Who Shot Liberty Valance. Um….Eli Wallach and Lee Van Cleef appear as a couple of no-good varmints…no, that’s The Good, The Bad and the Ugly. Um…  Spencer Tracy lends his talents to a star-studded and rather lengthy adventure filmed in the California desert…no, that’s It’s a Mad, Mad, Mad World.
Blurb From the VHS Jacket: “3 Academy Awards! The Most Ambitious Western Ever Filmed!”
What Did I Learn?: It’s a good idea to avoid films that were filmed in Cinerama format, unless you enjoy noticing distracting lines in the centre of the frame.
You Might Like This Movie If: You would gladly watch anything in Cinerama.
Really?: 1) It’s strange how Cleve (Gregory Peck) is portrayed as a money-hungry cad, yet he fights heroically, and even rescues several people during an Indian attack. I can only imagine writer James Webb wasn’t sure how to portray him. 2) See: “Synopsis”, #2…. James Stewart was an amazing actor, but he’s waaaaaay too old to play Linus Rawlings. Similarly, the scene where Zeb (George Peppard) decides to enlist in the Union Army is ruined by the fact that Peppard is far too old to portray a teenager, and he’s three years older than Carrol Baker, who plays his mom. 3) It’s an epic Western, I get that, but was it really necessary to include footage of the Hoover Dam and the LA freeway system right at the end, just to show off the Cinerama technology? Two hours and 42 minutes is an awfully long flick.
Rating: How the West Was Won was filmed nearly sixty years ago, and it certainly shows its age. The film is a bit dated, and many would find its subject matter - the settling of the American West to be politically incorrect. Some of it works - I liked Zeb’s story near the end, for instance, and some of  doesn’t - the musical numbers seem especially out of place. I might give this film an extra star if it wasn’t so damned long! 6.5/10 stars.
https://www.imdb.com/title/tt0056085/?ref_=nv_sr_srsg_0