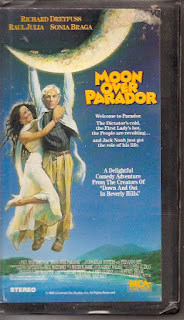 Synopsis: Richard Dreyfus overacts his way through highly-contrived, long-forgotten late-1980s comedy.
Blurb From the VHS Jacket: “Welcome to Parador: The Dictator’s cold, the First Lady’s hot, the people are revolting. And Jack Noah just got the role of his life.”
What Did I Learn?: Apparently, Sammy Davis Jr. would perform for anyone, as long as he received a big cheque.
You Might Like This Movie If: You've always wanted to see Richard Dreyfus serve the interests of giant US corporations.
Really?: 1) So, everyone in this fictional Latin American nation speaks English as a first language, albeit with a Spanish accent. 2) Funny how everyone in Parador refers to their glorious leader as “The Dictator.” 3) Damn…how did I know that the local American businessman played by Jonathan Winters would wind up being the local CIA agent? 4) I think the ending could have used a re-write; up until the point when he burns the peasant village to the ground, we aren't entirely sure if Roberto (Raul Julia) is a villain or just a loveable rogue. Had screenplay writer Leon Capetanos (the story was based upon Charles Booth's The Magnificent Fraud, which was later re-used for Dave) chosen the latter option, he could have made Roberto the Dictator's successor, which would have allowed Jack and Madonna (Sonia Braga) to start a new life together.
Rating: See: “Synopsis.” Meh. 6/10 stars.
https://www.imdb.com/title/tt0095654/?ref_=nv_sr_srsg_0