The Life Aquatic With Steve Zissou (2004) 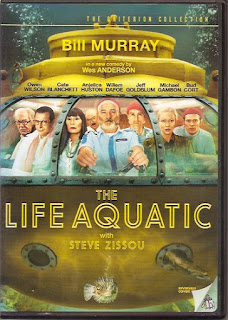 This would have been perfect for my tribute to revenge-themed movies. Also, please click the links to check out my reviews of some other Wes Anderson films: Bottle Rocket, The Royal Tenenbaums, and Rushmore.
Synopsis: It’s basically Moby Dick, feating a washed-up Jacques Cousteau wannabe and a very gullible crew.
Blurb From the DVD Jacket: “Internationally famous oceanographer Steve Zissou (Bill Murray) set sail on an expedition to hunt down the mysterious, elusive, possibly nonexistent Jaguar Shark that killed Zissou’s partner during the documentary filming of their latest adventure.”
What Did I Learn?: “Revenge” is a perfectly valid scientific reason for hunting down and killing an endangered species.
You Might Like This Movie If: You'll watch anything that involves a shark...
Really?: This film isn’t mean to be taken too seriously, so I can overlook some of the strange sea creatures, the fact that everyone carries a Glock, Kentucky Airlines, etc… but gee, that was one lacklustre ending.
Rating: The Life Aquatic With Steve Zissou is a very strange film that I found to be much funnier the second time around. This highly offbeat comedy moves at a snail’s pace, but never seems to drag, thanks in part to its laid-back-and-whimsical humour, and a spirited performance by Bill Murray as the “showboat and a little bit of a prick” Zissou. I’m still laughing about the time he remarks: “son of a bitch, I’m sick of those dolphins.” Highly recommended. 9/10 stars.