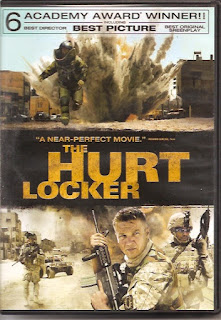 Synopsis: Demolitions dude dares death, disarms devices, displeases distressed duo.
Blurb From the DVD Jacket: “War is a drug. Nobody knows that better than Sergeant James, head of an elite squad of soldiers tasked with disarming bombs in the heat of combat.”
What Did I Learn?: 1) A jack-in-the-box is a piece of tin and a stuffed animal. 2) everyone’s a coward about something. 3) “the rush of battle is often a potent and lethal addiction, for war is a drug” - Chris Hedges.
You Might Like This Movie If: You know there's nothing funny about explosions.
Really?: I realize James and Sanborn are a couple of macho idiots who don’t particularly like each other, and there’s fuck-all for them to do for fun on a military base, but gee…. couldn’t they find something better to do to during their downtime than get rip-roaring drunk and beat each other senseless in a fun fistfight?
Rating: I’m not sure if the Hurt Locker deserved to win Best Picture in 2010, but it is a very good film that manages to weave together some genuinely suspenseful action scenes with some serious commentary about the nature of war, and its effects upon the young men and women who fight America’s wars. Highly recommended. 9/10 stars.