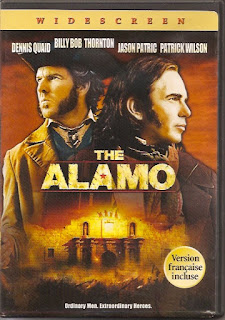 Synopsis (Haiku): The Texans got squashed / Santa Ana went too far / This film bombed big time
Blurb From the DVD Jacket: “From the studio that brought you Pearl Harbour… Academy Award winner Billy Bob Thornton (Bad Santa), Dennis Quaid (The Rookie) and Jason Patric (Rush) team up for the acclaimed action epic about one of the most important events in American history!”
What Did I Learn?: 1) “What are the lives of soldiers but so many chickens?” 2) Davy Crockett was a screamer. 3) “Without blood, without tears, there’s no glory.” 4) The word “catamite” is one step up from “assistant pederast.” 4) “One crowded hour of glorious life is worth an age without a name.”
You Might Like This Movie If: You remember the Alamo.
Really?: I have to give Colonel Travis credit for picking up an unexploded shrapnel shell and defusing it. I don’t think anyone in their right mind would attempt that, however.
Rating: The Alamo is a very good film that never got the critical recognition or box office success it deserved (see: “Synopsis”); it’s certainly a much more compelling and believable depiction of the 1836 siege and subsequent counter-attack by General Houston Than the John Wayne epic, and I liked Thornton’s very down-to-Earth portrayal of the larger-than-life Davy Crockett. Highly recommended. 9/10 stars.