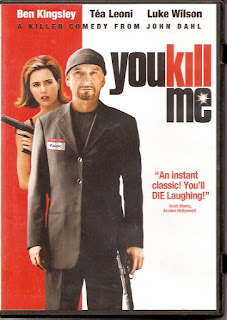 Synopsis: Alcoholic Albany assassin acts admirably, attacks addiction, acquires adult admirer, avenges accomplices’ annihilation.
Blurb From the DVD Jacket: “Frank is a hired gun with a huge problem - he just slept through the biggest kill of his career.”
What Did I Learn?: Sending a $25 gift card to your victims’ next-of-kin is the first step towards asking them to forgive you for a botched assassination.
You Might Like This Movie If: something awful has driven you to drink.
Really?: 1) Frank announces to his A.A. group that he’s a professional hitman, and…. They’re totally ok with it?! He doesn’t even receive a visit from the cops? 2) Frank’s sponsor Tom (Luke Wilson) states that he’s gay, and it’s never mentioned again. Why add this detail? 3) Are we supposed to care if the local Irish crime family wipes out the local Polish crime family in the Greater Buffalo Area? 4) How long does it take to become a really good mortician? Franks seems to be a natural from the get-go.
Rating: You Kill Me is an ok black comedy that’s notable for a fine performance from Téa Leoni and not much else - even the highly talented Ben Kingsley seems pretty flat. The film delivers a few good laughs,and several clever lines, but Luke Wilson isn’t given much to do, and the audience isn’t given very many reasons to care about either Frank’s recovery or the fate of his buddies in Buffalo. Meh. 6/10 stars.