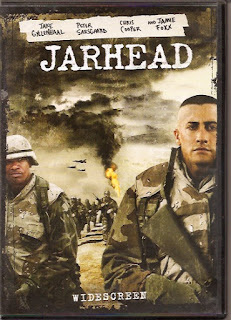 Please click the link to read my review of another film about the Gulf War, Three Kings.
Synopsis: Self-aware US Marine gets really bored hanging around the Saudi Arabian desert waiting for combat, and…. come to think of it, that’s pretty much the entire movie.  2005
Blurb From the DVD Jacket: “Jarhead (the self-imposed monicker of the Marines) follows Swoff (Jake Gyllenhaal) from a sobering stint in boot camp to active duty, where he sports a sniper rifle through Middle East deserts that provide no cover from the heat or Iraqi soldiers.”
What Did I Learn?: Every war is different. Every war is the same.
You Might Like This Movie If: You're in the mood to hear some clever and insightful first-hand commentary about the 1990-91 Gulf War.
Really?: 1) Jarhead was based upon the true story of Anthony Swofford, so I suspect most of the events depicted in this film are pretty accurate. That said, I had a little trouble believing Swofford would merely face extended latrine duty after he was wrongly accused of dereliction his duty and almost blowing up the base after allowing a pile of parachute flares to catch fire. I suspect he would probably face time in a military prison, followed by a dishonourable discharge. 2) So, Swofford and Kruger really, really want to turn another human being into a “pink mist” before the war ends? Hey, that might be an accurate depiction of the way snipers view the world, but it’s hard for the audience to identify with the protagonist.
Rating: Jarhead is an interesting, and somewhat thoughtful film about a young man who enlists in the Marine Corps and slowly loses his mind from boredom and possibly heat-stroke. Jamie Foxx delivers a great performance as Swofford’s gung-ho sergeant, and I loved the film’s cinematography, but Jarhead really starts to drag once the Marines hit the desert, and there isn’t much of a plot. 7.5/10 stars.