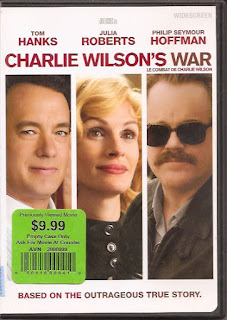 Tom Hanks Quadruple Feature #3 (My apologies - I meant to finish this mini-tribute to Tom Hanks last month, but I got a little side-tracked with other matters) Oh, and please click the links to read my reviews of two other movies that deal with the war in Afghanistan: The Living Daylights and Rambo III.
Synopsis: Hard-drinking, and surprisingly liberal good-ole-boy Texan politician single-handedly solves America’s biggest foreign policy crisis of the early 1980s…and creates an entirely new one for the following century. 2007
Blurb From the DVD Jacket: “Based on the outrageous true story.”
What Did I Learn?: 1) You know you’ve hit rock bottom when you’re told you have character flaws by a man who hanged his predecessor in a military coup. 2) They don’t serve whisky in rehab.
You Might Like This Movie If: You know the Soviet Union made a big strategic blunder when it spent years bogged down in Afghanistan, and...oh, wait.
Really?: 1) See: “Synopsis.” Seriously, I realize Charlie Wilson’s War is a biopic that highlights Wilson’s rather important role in getting arms and supplies to the Afghan resistance, but holy shit, the only reference to Ronald Reagan is near the end, to suggest the Gipper didn’t know what was going on. I had a hard time believing Wilson and the CIA could do their thing without *some* involvement from the rest of the Executive Branch. 2) You know, I don't think screenwriter Aaron Sorkin ever provides a credible reason for Wilson's deep interest in helping out the rebels.
Rating: I wanted to like Charlie Wilson’s War a bit more than I did. The film is amusing at times, Hanks brings a roguish charm to the title role, and I liked his exchanges with Hoffman’s character. The big problem is that there’s no antagonist for Wilson, and he never encounters a roadblock he can’t handle, so there isn’t really any tension - just a lot of meetings; people ask him to get more money for the Afghan rebels, he succeeds, and the cycle repeats. Moreover, we know there’s no possibility of a serious romance between Wilson and Joanne Herring (Julia Roberts), so their flirting seems tacked-on and pointless. 6.5/10 stars.