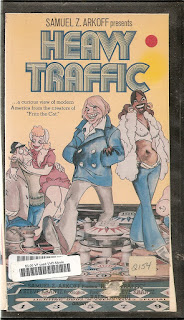 Blurb From the VHS Jacket: “An animated fantasy of hard-edged city life.”

What Did I Learn?: Apparently, 1970s-era New York City pinball arcade owners were quite blasé about customers destroying their machines.

You Might Like This Movie If: you want a few pointers on how to smooth-talk the ladies.
Really?: Heavy Traffic is a Ralph Bakshi animated fantasy, so it’s hard to judge it in terms of its overall credibility. That said, it’s strange that Bakshi would make Michael (the protagonist) so unsympathetic; he pushes a naked teenage girl off a rooftop and never lifts a finger to help her afterwards, and he later beats a man senseless with a lead pipe in order to steal his wallet. Why in the world should we give a shit about his welfare?

Rating: Heavy Traffic is a dated, vulgar, and rather unfunny “comedy” (see: “Synopsis”). I'll give it a few stars for an interesting soundtrack and some cool visuals of New York City, but I cannot recommend this movie. 3.5/10 stars.