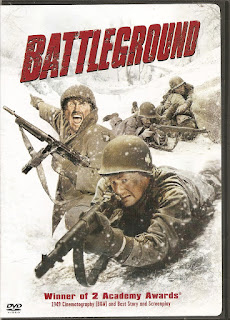 War Movie #5 (My apologies for taking a month to resume blogging. I’ve been a little busy with freelance work and slightly preoccupied with computer issues.)

Synopsis: Ever wanted to see a pre-Fantasy Island Ricardo Montalban freeze to death? If so, you’re going to love this movie.

Blurb From the DVD Jacket: “December, 1944. A civilian victim of the Battle of Bastogne scrounges through garbage to find a scrap of food. ‘I don’t even see those things,’ a war-numbed GI says. ‘I want to remember them!’, his buddy snaps.”

What Did I Learn?: “PFC” stands for “Praying for Civilian,” not “Private First Class.”

You Might Like This Movie If: You're a big fan of Ricardo Montalban's fine acting...
Really?: 1) Pvt. Layton doesn’t have a place to sleep on his first night with the unit, and.... he doesn’t speak up, or ask for a cot before the lights are turned out? Come on.... 2) Funny how a number of the outdoor scenes feature very, very flat ground. Hey, this wasn’t partially filmed on a sound stage, was it?

Rating: I must admit that I was pleasantly surprised by Battleground. I expected a low-budget B-movie (the film does have a few problems, of course – it has a very slow start, and a minister’s sermon lapses into outright editorializing), and it actually isn’t bad – Battleground even won a couple of Oscars in 1949 for Best Cinematography and Best Story and Screenplay. 7.5/10 stars.