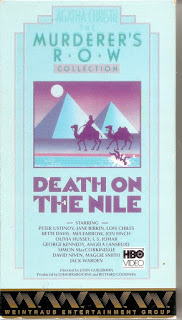 Synopsis: Hmm....Peter Ustinov, David Niven, Bette Davis, Angela Lansbury....hey, this is your golden opportunity to watch all of Hollywood’s favourite old farts bump each other off!

Blurb From the VHS Jacket: “One of Agatha Christie’s most popular novels has been made into a sumptuous whodunit with a dazzling all-star cast, beautiful views of Egyptian pyramids, and an intriguing murder mystery to challenge armchair detectives everywhere.”

What Did I Learn?: It takes more than a venomous serpent to stop the great Hercule Poirot! [That’s a quote from the sleuth, himself, by the way.]

You Might Like This Movie If: You know that the late Peter Ustinov had the ability to work with anyone.
Really?: 1) Simon and Jacqueline concoct an intricate, and incredibly convoluted scheme to ice Linnet, but wouldn’t it have been a whole lot simpler, and far less suspicious if they had made the whole thing look like an accident? For instance, the three of them climbed a pyramid together. Why didn't they simply push Linnet off the top, and then tell everyone she slipped? 2) So wait – Poirot accuses Andrew Pennington of nearly killing Simon and Linnet with a boulder without a shred of evidence? And why isn’t this ever mentioned again? 3) Hold on - if Simon's plan was to throw the gun into the river, why did he dispose of the extra bullet? That doesn't make sense.

Rating: Clocking in at 135 minutes, Death on the Nile is a little long, and more than a little contrived in places (see: “Really?”) but it’s a compelling, and occasionally humourous murder mystery that boasts an impressive array of performers and some great on-location shots. Oh, and kudos to Ustinov for his lovably over-the-top portrayal of Poirot. 9/10 stars.