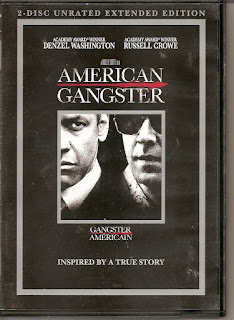 This would have been perfect for my salutes to gangster movies, and urban crime films.

What Did I Learn?: The loudest one in the room is also the weakest one in the room. 2) Either you’re somebody, or you ain’t nobody. 3) You can be successful and have enemies or you can be unsuccessful and have friends. 4) The number one fear of people isn't dying, it's public speaking. 5) Quitting while you're ahead, is not the same as quitting. 6) One does not rub a stain out of a $25,000 alpaca rug – you blot that shit!

You Might Like This Movie If: You're ok with the knowledge that Hollywood hasn't had an original idea for a long, long time.
Really?: Is it just me, or was anyone else a little disgusted by Frank’s “face turn” near the end of the movie? The film opens with him setting another man on fire, and he later corrupts his entire family, and destroys countless lives by selling cheap heroin, and we’re supposed to sympathize with him because he helps Richie Roberts (Crowe) nail some crooked cops?

Rating: American Gangster is a gritty, intelligent and compelling drama with high production values and several fine performances. It’s a great film, but writer Steven Zaillian and director Ridley Scott never know how to portray Frank Lucas; is he a flawed tragic hero, or an affable-but-cold blooded sociopath? Zaillian and Scott present him as both, which seems a little muddled (see: "Really?")  9/10 stars.