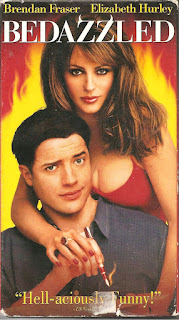 Synopsis: It’s a bit like the 1967 version of Bedazzled, only louder and dumber.

Blurb From the VHS Jacket: “The Devil’s never been so hot – or hilarious! Brendan Fraser is a hapless, love-starved computer technician who falls prey to sinfully sexy Elizabeth Hurley when he agrees to sell her his soul in exchange for seven wishes. But the sly Princess of Darkness has more than a few tricks up her… sleeve.”

What Did I Learn?: Apparently, there’s absolutely no point in selling one’s soul to Satan because you won’t receive anything of any value for it.

You Might Like This Movie If: You will gladly sell your soul for fun and profit.
Really?: 1) See: “What Did I Learn?” Seriously, wouldn’t it make a lot more sense for Satan to make his/her customers happy? Wouldn’t that lead to word-of-mouth business? 2) So, was there a clause in the contract that explicitly bans wishing for more wishes, or wishing to declare the contract null and void? Funny how nobody ever addresses this possible loophole. 3) Elliot (Fraser) must really like Alison, because the Devil is a whole lot hotter and more interesting. Just sayin'.

Rating: Elizabeth Hurley delivers a sultry, and incredibly likeable performance as a female Lucifer (which is why I’m giving it a lukewarm recommendation), but Bedazzled has a couple of key problems: Brendan Fraser wildly overacts, and his character is initially so awkwardly obnoxious that it’s hard to sympathize with him, and the script isn’t terribly clever or funny; we get the punchline of each wish almost immediately, so much of the movie’s action consists of Fraser yelling and screaming. 5.5/10 stars.