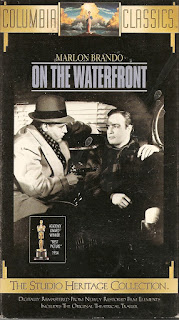 Synopsis: Brando mumbles his way to an Oscar.

Blurb From the VHS Jacket: “Marlon Brando, Karl Malden and Eva Marie Saint star in the timeless, Academy Award-winning film about a dockside worker and ex-prizefighter who heroically goes up against his corrupt labor leaders to expose the union’s criminal practices.”

What Did I Learn?: Snitching is the right thing to do.

You Might Like This Movie If: You know that only Marlon Brando and Rod Steiger could have pulled off the "I could have been a contender" scene.
Really?: Until I saw this movie, I had no idea that taxi drivers were allowed to cover the rear windows of their cabs with venetian blinds.

Rating: On the Waterfront feels a little dated in places, but one can still sympathize with Brando’s magnificent portrayal of a simple and disillusioned man who struggles with his conscience to do the right thing. Brando’s performance is unforgettable, but there’s actually a lot of star power in On the Waterfront, including Malden as a crusading priest, and Rod Steiger as Terry’s gangster brother who does his best to keep his younger sibling out of trouble. Highly recommended. 9/10 stars.