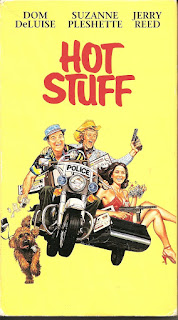 Blurb From the VHS Jacket: “This is fast-paced and hilarious excitement based on an unbelievable but true incident: cops who set up a fencing operation to catch thieves!”

What Did I Learn?: Apparently, machine guns are completely useless firearms. I mean, several villains shoot off about 80,000 rounds at our heroes and ever come close to hitting anyone. [Oh wait – I think I learned that lesson from Where Eagles Dare]

You Might Like This Movie If: You're in the mood for some hot stuff! [Warning: this Youtube video is painful to watch.]
Really?: 1) So, wait....everyone warns Ernie and Doug that operating a pawnshop will only enrage the local Mafia, the gangsters eventually show up, and then they’re completely unthreatening? That’s a bit of a letdown. And then the other criminals beat up the gangsters, even though Ernie just told them he’s a cop and they’re all under arrest? I’m not buying that scene. 2) Funny how Ramon Savadera (Luis Avalos) was cut out of the VHS jacket credits, not to mention the caricature illustration, even though the pawnshop is a four-person, not a three-person operation.

Rating: Hot Stuff is an enjoyable, but highly forgettable fluffy comedy that starts out quite well when a unit of burglary unit detectives decide to take over a local pawnshop, but takes a very wrong turn in the second act and becomes a much dumber film. Meh. 6/10 stars.