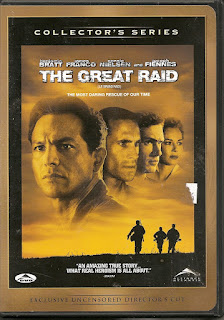 Blurb From the DVD Jacket: “As World War Two rages, the elite 6th Ranger Battalion is given a mission of heroic proportions: push 30 miles behind enemy lines and liberate over 500 American prisoners of war.”

What Did I Learn?: If you’re ever arrested for belonging to a resistance/terrorist cell and then released from prison, you MIGHT want to wait awhile before you visit with your comrades-in-arms. Just sayin’...

You Might Like This Movie If: You'll watch anything that involves hoary old WWII-era stereotypes and the word "Raid."


Really?: 1) Gee, it’s 1945, yet nobody smokes, swears, or expresses the slightest war-weariness or cynicism. 2) So wait, Major Lapham is pretty much dying of malaria, and yet he refuses a quinine tablet from the Japanese, and insists upon standing when he faces his captors? I’m calling “bullshit”.  3) Wow.... I really didn’t need to see American POWs getting burned alive. I'm sure it happened, but I certainly didn't need to actually view it.

Rating: Much like U-571, there’s something about The Great Raid that really rubbed me the wrong way; it’s a joyless, unpleasant (see: “Synopsis”), inauthentic and almost unwatchable post-9/11 American patriotic quasi-propaganda film that’s devoid of suspense and populated with simplistic, two-dimensional characters who are never really developed. The Japanese are all portrayed as inhuman monsters, while every single American (with one exception, but he was driven mad from too much time in the prison camp) are all brave, selfless, and totally committed to the war effort. Oh, and the scenes of Margaret the nurse (Connie Nielsen) in Manila seemed tacked-on, and added nothing to the story. The great raid on Cabanatuan is a true story of heroism of that deserves to be told, yet I cannot recommend this movie. 3/10 stars.

Would it Work For a Bad Movie Night?: Not a chance, but take a drink every time somebody says something along the lines of: "we gotta get those boys out of that camp!"