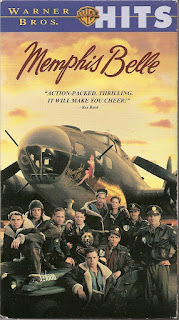 Blurb From the VHS Jacket: “They’ve flown 24 missions. Only one thing keeps the flyboys of the B-17 Memphis Belle from going home: mission 25, a perilous daylight raid.”

What Did I Learn?: 1) There’s always a religious guy in a war movie. 2) Generally speaking, it’s a bad idea to tell people you possess four years of med school training when you really don’t.

You Might Like This Movie If: You firmly believe a 44-minute documentary should have been remade into a 107-minute feature film with B-list 1980s actors.
Really?: 1) So, wait – the higher-ups in the American military really want to use the crew of the Memphis Belle for propaganda purposes back home. Why would they send the boys on a daylight attack in the heart of Germany, when a “milk run” over France would be so much safer? 2) Funny how Sgt. Daly (Eric Stoltz) gets badly hit, the crew anguishes over what to do (they believe he’ll never make the three-hour return to Britain, but he might survive if they parachute him into German hands), and then.... they keep him on board, and he survives the trip. I guess his wounds weren’t as serious as they thought?

Rating: Memphis Belle is a technically competent war picture that features some great aerial combat scenes and an impressive cast. That said, the script doesn't include a lot of character development (honestly, I had trouble keeping track of who was who), Matthew Modine’s protagonist isn’t interesting enough to carry the picture, and  - here’s an unusual complaint for this blog – the movie seems to end rather abruptly (i.e. while I often complain when films drag on too long, this one seems a bit too short). 6.5/10 stars.