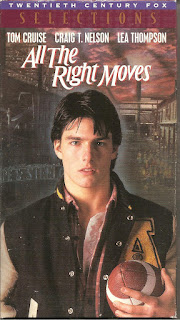 
Blurb From the VHS Jacket: “The only way football star Stefan Djordjevic (Cruise) will avoid a life in the blast furnaces of his bleak Pennsylvania hometown is by winning a college scholarship. Even his coach (Craig T. Nelson) dreams of parlaying a winning team into a college far away from this graveyard of the American Dream.”


What Did I Learn?: If somebody offers you a football scholarship right before a big game that could change everything, take the deal!


Really?: 1) Considering Coach Nickerson has his future in his hands, I’m inclined to think Stefan would do a much better job of concealing himself the night the vandals trash the coach’s house. 2) And I can see the coach being upset about that night, but blacklisting Stefan from recruiting colleges seems awfully nasty and unfair – wouldn’t he have found a better way to work things out? 3) Wow...that ending wraps everything up in a nice, neat little package, doesn’t it?  4) Funny how Cruise and his buddies play the big Walnut Heights game mid-way through the movie, and then...there’s no more football from that point on. 5) Maybe I missed something, but there’s a scene near the end when Stefan gets arrested in his classroom for “armed robbery” by a couple of cops (are they really cops, or are they local hooligans?), and then the scene is never explained or mentioned again. WTF? 6) Stefan/Cruise is 5’10”? Oh come on...


Rating: All the Right Moves is an ok, but far-from-great story about teenagers with dreams of getting out of a depressed steel town. Craig T. Nelson was born to play a football coach, and there are some decent performances from Lea Thompson and the late Chris Penn (I can’t watch Tom Cruise without thinking to myself: “he’s obviously acting”). The movie has a great first act before the plot starts to meander, and it ends with several storylines unresolved. 6/10 stars.