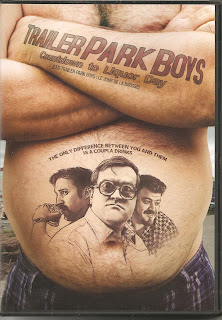 Synopsis: Loveable lumpenproletarian louts get out of jail, pour a few rum-and-Cokes, and wreak havoc.


Blurb From the DVD Jacket: “Ricky, Julian and Bubbles are about to get out of jail, and this time, Julian vows to go straight, even open a legit business. Soon the Boys will all be rich. At least that’s what they’ve told the parole board. But when they arrive back at the park, they find it’s not the same old Sunnyvale – and it’s not the same old Jim Lahey, Trailer Park Supervisor. Lahey’s a new man, hasn’t had a drink for two years. But unfortunately for Lahey, having the Boys back in the park is way too much pressure for him to bear and the countdown to liquor day is on!”


What Did I Learn?: You stand a good chance of having your felony case dismissed out of court if the arresting officer is drunk when he busts you.


You Might Like This Movie If: You always wondered what could have happened to the characters in Goin’ Down The Road, had they stayed in Nova Scotia and grown some dope.


Really?: The Boys have successfully robbed a bank, they have two minutes before the *real* armoured car shows up, and Julian decides he’s going to help out the guy who keeps sending him to prison.


Rating: Countdown to Liquor Day provides some good laughs, but I firmly believe The Trailer Park Boys TV show started off funny and then became increasingly lame after the fifth season. The comedic magic of those early seasons is long gone, and I miss Corry and Trevor. 7/10 stars.