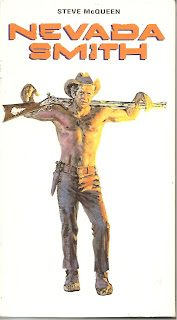 
Blurb From the VHS Jacket: “Nevada Smith is a rugged innocent boy born in the 1890s during California’s gold rush days to a native American mother and white father. When he finds his parents have been murdered by vicious killers, he sets out to track them down.”


What Did I Learn?: If you know there’s a revenge-crazed gunslinger coming after you, you might want to wait awhile before accepting a total stranger into your gang of outlaws – especially some dude who totally fits the description.


You Might Like This Movie If: You’ve always wanted to see a non-science fiction version of The Terminator.


Really?: 1) Steve McQueen was a little old to be playing a teenaged/early 20s N.S., and he didn’t look at all native American. 2) Smith saves the second man on his hit-list from drowning in a swamp because he wants to kill the bastard himself. 3) It’s funny how none of the killers ever seem to recognize Smith, even though they meet him very early in the film.


Rating: Nevada Smith is an enjoyable Western with a deeply-flawed hero. Smith is so consumed with vengeance that he has himself thrown into a hellish Louisiana swamp prison in order to get close to one of the killers, who he even befriends. A pre-Bob Newhart Show Suzanne Pleshette suggests to Nevada that he might not be a whole lot better than the men he’s tracking down. 7.5/10 stars.
http://www.imdb.com/title/tt0060748/