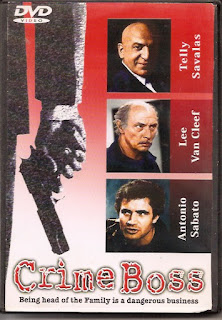 Synopsis: Pre-Kojak Telly Savalas snarls his way through grainy, badly-dubbed, low-budget Italian gangster flick.
Blurb From the DVD Jacket: “Being head of the Family is a dangerous business”
What Did I Learn?: Hamburg Germany looked kinda seedy in 1972. 2) Apparently, it’s customary in Italy to chug down entire tumbler glasses full of wine.
You Might Like This Movie If: You'll gladly watch anything that features the legendary Mr. Savalas.
Really?: 1) Um….I don’t know who designed the DVD jacket, but Lee Van Cleef had NOTHING TO DO WITH THIS MOVIE!! This is actually more misleading than the VHS jacket of It Seemed Like A Good Idea at the Time which falsely presented the film as a John Candy vehicle, even though he had a very minor role. 2) Hold on… Antonio Mancuso’s (Antonio Sabato) big plan to gain Don Vincenzo’s (Savalas) trust involves a high-speed chase through the streets of Hamburg, and narrowly avoiding the cops? That sounds awfully risky to me. 3) Speaking of risky, is it really a good idea to quasi-rape Vincenzo’s niece (she’s obviously attracted to Antonio, but she tells him to stop) in Don Vincenzo’s own mansion? 4) I had a bit of trouble believing Don Vincenzo would allow Antonio to return the stolen heroin to him in his home (kinda smells like a police sting operation, doesn’t it?), or that there wouldn’t be any lasting enmity between Don Vincenzo and Antonio after the former tells his goons to beat the crap out of the latter.
Rating: While I’ve always considered myself to be a Telly Savalas fan, I should have given Crime Boss a pass - I suspect he signed on for this film strictly for the paycheque. Nothing about Crime Boss works - the film is grainy and poorly-edited, Sabato provides a wooden performance, the story meanders and doesn’t really go anywhere, and the audience isn’t provided with many reasons to care about any of these characters. I’ll give Crime Boss a few stars for good old Telly and some interesting cinematography (in case you want to step back in time and see what urban Italy and Germany looked like in the early 1970s) but I cannot recommend this movie. 3/10 stars
Would it Work For a Bad Movie Night?: Sure - take a drink any time you ask yourself: “wait, why in the world would Antonio do that?”
https://www.imdb.com/title/tt0068566/?ref_=nv_sr_srsg_0