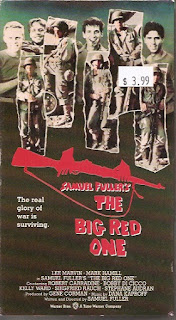 War Movie #3
Synopsis: Lee Marvin whips a bunch of raw recruits into a fighting unit during the Second World War….no, that’s the Synopsis for The Dirty Dozen. Ok, Mark Hammill portrays a young man who must take up arms against an evil dictatorship….no, that’s Star Wars. Um… four likeable young men bond over one last adventure before they enter the workforce….no, that’s Breaking Away.
Blurb From the VHS Jacket: “And that means The Big Red One may be one of the most immediate, most intense, truest war movie you’ve ever seen.”
What Did I Learn?: 1) The Kasserine Pass is a shit hole. 2) The Bangalore Torpedo would have to be the most impractical weapon ever created. 3) You know how you smoke out a sniper? You send a guy out in the open and see if he gets shot. 4) Killing insane people is bad for public relations.
You Might Like This Movie If: You'll gladly watch anything about a big red one.
Really?: 1) Um….wasn’t Lee Marvin a little old to play an infantry sergeant? 2) I certainly understand Pvt. Vinci getting upset when a fellow soldier mocks his Italian heritage, but shoving a rifle into the guy’s mouth and threatening to fire? And the sergeant doesn’t say anything?
Rating: I was never a big Lee Marvin fan until I watched The Big Red One about a decade ago and found myself impressed with his world-weary, and occasionally tender portrayal of a professional soldier who has seen too much killing. The story is episodic, and it’s clear in places that writer/director Samuel Fuller didn’t have a big budget at his disposal, but the film is meant to depict Fuller’s own experiences in the war, and it works; the audience gets to know these men, and we feel genuine concern when it looks as though the entire squad is about to get wiped out on D-Day. The Big Red One also includes an impressive performance from Hamill, and suggests that he could have gone on to bigger and better roles if he hadn’t been typecast as Luke you-know-who. Highly recommended. 9/10 stars.