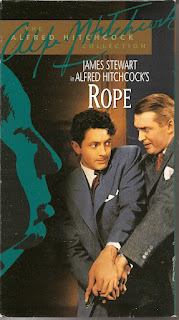 Blurb From the VHS Jacket: “James Stewart stars with Farley Granger and John Dall in a highly-charged thriller inspired by the real-life Leopold-Loeb murder case. Granger and Dall give riveting performances as two friends who strangle a classmate for intellectual thrills, then proceed to throw a party for the victim’s family and friends – with the body stuffed inside the trunk they use for a buffet table.”

What Did I Learn?: Telling somebody they’re a great chicken-strangler is NOT a compliment.

You Might Like This Movie If: You'll watch anything that involves hiding a corpse during a social get-together.
Really?: 1) Was anyone else a little disappointed in the monologue Rupert (Stewart) delivers when he discovers the truth? I mean, here’s a guy who has made a career as an iconoclastic philosopher, and he really has nothing to say except that his former students are a couple of depraved monsters. 2) Wouldn’t the neighbours notice a gunshot during the scuffle between Rupert and Philip?

Rating: While Stewart didn’t like actually like this movie (believe it or not, it takes nearly half an hour before he appears on-screen), and it is surprisingly disturbing for the late 1940s, Rope is also a suspenseful and compelling psycho-drama. Moreover, Dall delivers a magnificent, if slightly over-the-top performance as the ringleader of the two killers. 7.5/10 stars.