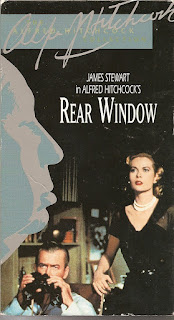 Blurb From the VHS Jacket: “None of Hitchcock’s films has ever given a clearer view of his genius for suspense than Rear Window. When professional photographer LB ‘Jeff’ Jeffries (James Stewart) is confined to a wheelchair with a broken leg, he becomes obsessed with watching the private dramas of his neighbours play out across the courtyard.”

What Did I Learn?: 1) "Intelligence. Nothing has caused the human race so much trouble as intelligence." 2) "Nobody ever invented a polite word for a killin' yet." 3) "When two people love each other, they come together - WHAM - like two taxis on Broadway." 4) Guys, if you and your lady are having issues, there's nothing like a little paranoid suspicion that's directed at a nearby neighbour to bring you two lovebirds back together again.


Really?: So wait, Jeff is all set to dump Lisa, a hot chick (Grace Kelly) who brings him food while he's injured, all because, um...she's rich, has excellent taste, and likes to attend A-list parties? Gee, that makes a lot of sense.