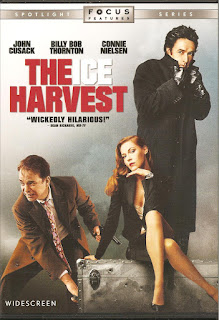 
Synopsis: Sleazy lawyer and amoral strip-club owner learn that ripping off the mob isn’t such a hot idea.


Blurb From the DVD Jacket: “When lawyer Charlie (John Cusack) and his partner Vic (Billy Bob Thornton) steal from a mob boss, they think they’ve pulled off the perfect crime. But when they race through a night filled with mayhem, lust and lethal surprises, they realize that the biggest risk they’ll take is trusting each other.”


What Did I Learn?: If you’ve just stolen $2 million from the mob, you’re pretty sure a hitman is looking for you, and you’re blowing town in a few hours, you might want to focus on making your exit, rather than on bar-hopping and attempting to bang the hot chick who runs the local strip bar.


Really?: 1) I had a bit of trouble believing Cusack and Thornton could actually lift, let alone move a metal trunk containing a very pissed-off gangster the size of Mike Starr. 2) The Mafia has a presence in Wichita,  Kansas? Maybe, but wouldn’t that part of the country more likely be controlled by biker gangs? 3) Funny how Cusack finds that incriminating photo so quickly, and so easily… 4) So wait… considering Cusack is on-hand every time somebody gets murdered, should he expect the long arm of the law to follow him when he leaves the country? At the very least, he ends the movie driving a stolen Mercedes…


Rating: The Ice Harvest isn’t a great film by any stretch – it’s a tad contrived, and you have to suspend your sense of disbelief more than a few times – but it’s a fun little caper with a decidedly dark sense of humour. Watch for Randy Quaid near the end. 7/10 stars.