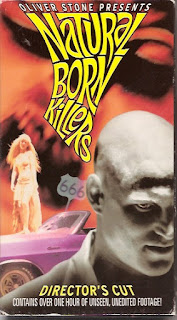 Please click the link to remind my review of Badlands, a flawed but much better treatment of the Charles Starkweather / Caril Fugate spree killings.
Synopsis: Oliver Stone exposes America’s depraved passion for violent entertainment by making a completely unwatchable cinematic turd that glorifies two horrible human beings.
Blurb From the VHS Jacket: “Director Oliver Stone brings you a bold new look at a country seduced by fame, obsessed by crime and consumed by the media.”
What Did I Learn?: 1) The media is like the weather, only it’s man-made weather. 2) Nobody can stop fate, nobody can. 3) You can’t hide from your shadow. 4) It’s pretty hard to beat the king. 5) Repetition works. Repetition works.
You Might Like This Movie If: You've always wanted to see a natural born killer in action.
Really?: 1) Funny how Mickey and Mallory enjoy a world-wide cult following (which is ridiculous in itself), but they’re able to drive through the Southwestern US murdering cops and civilians alike without encountering too many difficulties. Is there an actual manhunt for these two? 2) I had a bit of trouble believing Mallory would get upset with Mickey for murdering the native shaman after they had iced dozens of innocent victims. 3) So, wait - Mickey and Mallory are both bitten by rattlesnakes, and they’re not only able to drive to a drugstore, but run away when trouble ensues and then get into a standoff with police?
Rating: Ugh. Much like The Rocky Horror Picture Show and Love and a .45, Natural Born Killers is one of the few films I decided to review even after I abandoned it mid-way through. Honestly, I don’t know where to begin - NBK is pretentious (what’s the deal with all the stock images?), far too long, and loaded with so many bad performances and gratuitously violent images that its simultaneously impossible to take seriously and extremely difficult to stomach. NBK doesn’t work on any level; it fails as a condemnation of American violence because it lionizes Mickey and Mallory and portrays law enforcement as every bit as evil as them; it fails to tell us anything about the lead characters or what makes them tick because the script is cartoonish (Stone himself says one shouldn’t take the film too literally)  and even presents Mallory’s upbringing as a demented TV sitcom; and the film is so ugly that it fails even as entertainment. I cannot recommend this movie. 1/10 stars.
Would it Work for a Bad Movie Night?: Possibly. Take a drink any time you find yourself asking: “why am I watching this?”
https://www.imdb.com/title/tt0110632/?ref_=nv_sr_srsg_0