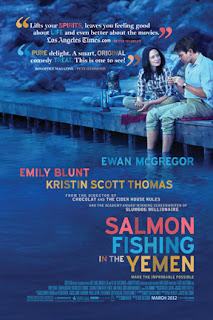 Synopsis: Stuffy public servant and go-getter consultant fall in love… while they facilitate a hereditary dictator’s desire to throw precious resources at a grandiose scheme that involves introducing an alien species into his country’s fragile ecosystem.
Blurb From imdb.com: “A fisheries expert is approached by a consultant to help realize a sheik's vision of bringing the sport of fly-fishing to the desert and embarks on an upstream journey of faith and fish to prove the impossible possible."
What Did I Learn?: 1) a manned mission to Mars is theoretically possible. 2) Anglers are obsessive crazies. 3) A P45 is the official document given to an employee when his services are no longer required by his or her employer. 4) Apparently, fishing is a lot like religion…. This is never really explained or explored beyond a superficial level, but everyone agrees with it.
You Might Like This Movie If: You get very emotional about salmon.
Really?: Gee…is spending billions of oil dollars on a plan to divert water into a long-dead river and introduce a non-native species really a wise or responsible investment? The Sheikh claims near the end that it was never about satisfying his desire to fly-fish for salmon, so couldn’t he have at least chosen another species better suited for the country? Along the same lines, it’s also odd that the team manages to hire the engineers who designed the much-maligned Three Gorges Dam in China, and nobody thinks to provide any critical commentary about that project.
Rating: Salmon Fishing in the Yemen is a nice little romantic comedy, and….that’s about as far as it goes. This film could have been a lot funnier, and a truly biting political satire if it wasn’t cowed by modern-day political correctness (for example, the Sheikh is willing to throw billions of dollars away on a ridiculous vanity project, yet he’s portrayed as a benign purveyor of New Age psychobabble, rather than an egomaniacal narcissist), and if it didn’t make the absurd storyline secondary to the predictable romance that develops between Dr. Jones (McGregor) and Harriet (Emily Blunt).  7/10 stars.
https://www.imdb.com/title/tt1441952/?ref_=nv_sr_srsg_0