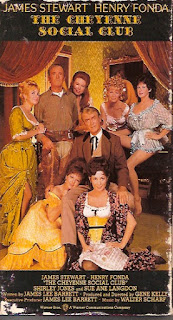 Synopsis: America’s favourite old farts run beloved bordello into the ground.
Blurb From the VHS Jacket: “With a wink, a nod and a bullet and lovely lovely Shirley Jones and Sue Ann Langdon as co-stars, The Cheyenne Social Club welcomes you to a West that’s as affable as its two stars and as spirited as its renowned producer-director: Gene Kelly.”
What Did I Learn?: There’s no higher measure of success than to be a Republican businessman. 2) A lawyer will only tell you enough to leave you confused. 3) Trouble rides a fast horse. 4) When you spend all day on the plains, with only your horse to talk to, you do a lot of dreaming. 5) It ain’t seemly to bring up politics when you’re borrowing money. 6) When a woman’s talking to you, you can be pretty sure she thinks she’s in control. And when she’s not talking to you, you can be pretty certain you’re in control.
You Might Like This Movie If: you've always wanted to see Jimmy Stewart own and operate a bordello.
Really?: 1) I have to admit that I don’t really get the friendship between John (James Stewart) and Harley (Henry Fonda); they’ve worked together for ten years, yet when John receives the initial letter, he doesn’t mention anything to his good buddy? He can’t find a private room for Harley in the bordello, and grudgingly lends him a few dollars? Meanwhile, Harley hears that John is in a fistfight, and doesn’t go to his aid? None of that sounds right. 2) Funny how the Cheyenne Social Club houses six prostitutes, but only Jenny (Jones) is given much of a personality. 3) I’m still shaking my head over this film’s truly lacklustre ending [Spoiler Alert!]… John signs the establishment over to Jenny, and then he and Harley hightail it back to Texas to avoid another gunfight. Aren’t John and Harley getting a little old to still be working as cowboys? Weren’t John and Jenny starting to fall in love? Couldn’t John have sold the club to Jenny, and then opened up a saloon in Cheyenne?
Rating: The Cheyenne Social Club is an amiable, good-natured Stewart / Fonda buddy picture that isn’t entirely sure if it’s a comedy or a Western, so it tries to be both but doesn’t entirely succeed as either. It’s hard to dislike The Cheyenne Social Club - it’s fun to watch Stewart and Fonda bicker with each other, but the story never really goes anywhere, and I doubt that I’ll remember much of it a few months from now. 6.5/10 stars.
https://www.imdb.com/title/tt0065542/?ref_=fn_al_tt_1