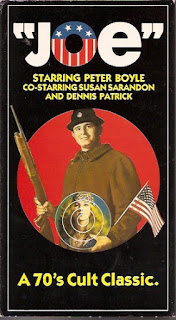 Synopsis: If you ever wanted to see Raymond’s dad play a violent, whacked-out-of-his-mind version of Archie Bunker and ice a bunch of hippies, this is your movie!
Blurb From the VHS Jacket: “THE SHARED DISTRUST OF ‘HIPPIE YOUTHS’ LEADS FACTORY WORKER JOE CURRAN (PETER BOYLE) AND ADVERTISING EXECUTIVE BILL COMPTON (DENNIS PATRICK) TO BECOME FRIENDS.” [For reasons unknown, nearly every word on this jacket is spelled out in capital letters]
What Did I Learn?: 1) Apparently, the 1968 George Wallace for President campaign commissioned a survey on the sexual preferences of American liberals. 2) If you’ve just committed a murder, it’s a really bad idea to openly discuss it afterwards.
You Might Like This Movie If: you enjoy hearing Joe spout off about politics and culture.
Really?: 1) I had a great deal of trouble believing Bill and Joe would form any sort of friendship, in part because of the yawning gap between each man’s socio-economic status, but mostly because it’s pretty obvious Joe is off his rocker. 2) Speaking of the friendship that forms between Bill and Joe, why in the world would Bill admit to killing his daughter’s drug-dealing boyfriend to a complete stranger (see: “What Did I Learn?”)? And isn’t it convenient how Melissa (Susan Sarandon in a very early role) somehow manages to overhear her Dad admit to the dirty deed? 3) So, Bill and Joe hate hippies and the counter-culture, but nevertheless take part in a drug-fuelled orgy? I didn’t buy that scene at all.
Rating: Joe is an unpleasant, contrived, and dated low-budget melodrama with a questionable message: hippies are pretty awful people, but anyone who openly opposes the 1960s counterculture is a latently violent crypto-fascist. Joe isn’t my cup of tea, but I will give it a few stars for an exceptional tour-de-force performance from Boyle, who somehow manages to make Joe human and relatable, even when he says some terrible things. I cannot recommend this movie. 4.5/10 stars.
Would it Work for a Bad Movie Night?: Absolutely! Take a drink any time you find yourself thinking: “Bill, you don’t have to do this…go home, dude.”
https://www.imdb.com/title/tt0065916/?ref_=fn_al_tt_3