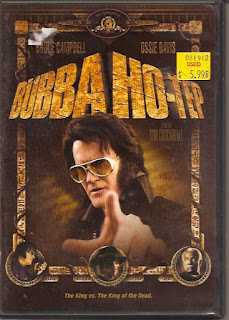 Synopsis: Bruce Campbell opens a can of whoop-ass on evil undead….no, that’s the synopsis for Army of Darkness. Um…. Ossie Davis humours an elderly, and possibly delusional buddy on an ill-advised adventure…no, that’s I’m Not Rappaport. Ok, the King of Rock-and-Roll abandons his identity, poses as a regular Joe, and goes on a mission to help others….no, that’s Finding Graceland.
Blurb From the DVD Jacket: “Mud Creek, Texas, is about to get all shook up.”
What Did I Learn?: If you have a bad hip and generally get around with the aid of a walker, it’s probably not a great idea to attempt a karate move.
You Might Like This Movie If: You're pretty sure Elvis didn't kick the bucket in 1977.
Really?: This movie asks us to believe Elvis switched identities with an impersonator and somehow wound up in a fleabag East Texas nursing home, his best friend is an elderly black guy who thinks he’s JFK, and the two of them are forced to forced to fight a 3,000-year old Egyptian mummy who feeds on the souls of the living. I don’t know where to begin.
Rating: Bubba Ho-Tep is one weird movie: part horror, part black comedy, and part character-driven drama about the fears of growing old and importance of feeling needed. I can’t call BHT a great film, but it spins a good yarn, and cult actor Campbell finds the right balance between noble and pathetic in his portrayal of Elvis. Check it out if you get a chance. 8/10 stars.