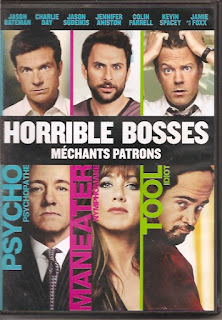 Happy New Year!
Synopsis: Jennifer Anniston interacts with three young men who hate their jobs so much they develop a plot for revenge…no, that’s the Synopsis for Office Space. Um….Kevin Spacey portrays a psychopathically nasty boss who provokes his assistant into a homicidal rage…no, that’s Swimming With Sharks. Um… three loveable idiots (straight man, fun-loving horndog, and batshit crazy weirdo) get into a lot of trouble after drinks one night…no, that’s The Hangover.
Blurb From the DVD Jacket: “For Nick (Jason Bateman), Kurt (Jason Sudeikis) and Dale (Charlie Day), the only thing that would make the daily grind more tolerable would be to grind their intolerable bosses into dust.”
What Did I Learn?: 1) Life is a marathon and you cannot win a marathon without putting a few band-aids on your nipples. 2 ) You don’t put a playground next to a bar. 3) No one’s going to pay you to be a husband, unless you marry Oprah. 4) There’s no law on the books against putting people’s toiletries up your ass. 5) The secret to success in the corporate world is the ability to take lots and lots of shit.
You Might Like This Movie If: You've worked for a horrible boss.
Really?: 1) Horrible Bosses is a screwball comedy that isn’t meant to be taken too seriously, but I had a few problems with the climax – wouldn’t the cops discover the gun was registered to Harken (Spacey), he has gunpowder on his hands, and the bullet in his leg was fired at point-blank range? 2) So, Nick has worked for Harken for what….seven or eight years? Wouldn’t he have sensed much earlier that Harken is a lying SOB who will never promote him, and sent out a few resumes along the way?
Rating: I wanted to like Horrible Bosses a bit more than I did; Spacey is great as the bane of Bateman’s existence, and the film delivers a few genuinely funny scenes, but I couldn’t help myself from thinking I had seen much of this before (see: “Synopsis”), or that the writers who penned this script and the principal leads were trying too hard for laughs - very little of the dialogue seemed natural or believable. 7/10 stars.