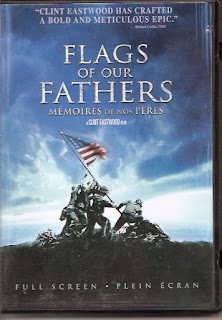 War Movie #1 (While I usually post my war movie reviews before Remembrance Day, I was quite busy earlier this month, so I wasn't able to get to them until this weekend).
Synopsis: It starts out as The Thin Red Line and quickly turns into That Thing You Do.
Blurb From the DVD Jacket: “On the frontline, there’s no time for fear.”
What Did I Learn?: 1) Iwo Jima is an “ugly, smelly, dirty little scab of rock” which translates as “sulphur island.” 2) Three days is a fucking beautiful thing. 3) No sense being a hero if you can’t look like one. 4) The military always trains you for desert warfare on a volcano.
You Might Like This Movie If: you're fascinated by the flags of our fathers.
Really?: So, was America really on the verge of bankruptcy near the end of WWII and ready to cut a deal with Japan due to a lack of funds, or was that just some useful spin to motivate the boys to sell war bonds? This is never made entirely clear.
Rating: Clint Eastwood’s Flags of Our Fathers is a powerful and thought-provoking look at America’s campaign in the Pacific theatre and the propaganda that enabled the country to sell war bonds. The film examines the brave young men who raised Old Glory over Iwo Jima, and were then used (and later discarded) by the government. Overall, Flags is an impressive war drama, although my only complaint would be a lack of focus in the second and third acts. As Ira Hayes becomes increasingly troubled by his PTSD and survivor’s guilt, it increasingly becomes his story, even though it’s not really that interesting, and I would have liked to have learned more about Doc Bradley and Rene Gagnon. Still, Flags of Our Fathers is highly recommended. 9/10 stars.